This beautiful hand-built bowl is the work of Lawrence Namoki, a Hopi artist from First Mesa in Arizona. His pottery bowls are coloured with minerals and plants he collects locally and are designed to tell the ancient stories of the Hopi elders.This bowl was made to tell of the Hopi prophecy of the coming of the 5th World.We share the story of the Prophecy Bowl with you:

In Panel 1 (below) the Hopi Elder sits with the Mayan Priest witnessing the alignment of the Great Planets and the Milky Way Galaxy heralding the coming of the 5th World. 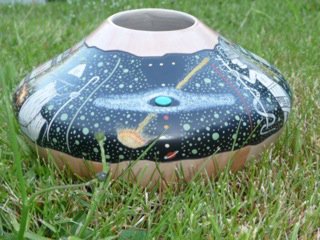 This panel also shows an alignment of the 3 stars of the Belt of Orion with the 3 previous worlds of humans. Below this is depicted the alignment that is coming on December 21, 2012, of the center of the Milky Way Galaxy (also called the galactic core of creation or Hunab Ku) with the 4th world.

This alignment signifies the beginning of the 5th world and the universal migration of the true compass point.

The return of the Blue Star Kachina tells us of the new day and new way of life, and new world that is coming. This is where the changes will begin. The changes will start as fires that burn within us (like the red star aspect of Sirius) in order burn up conflicts and desires, so that we can once again walk with the original teachings, and return to the peaceful way of life. 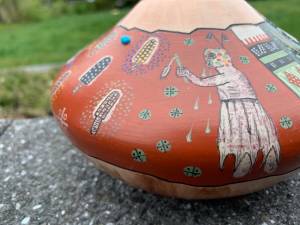 On the right side of Panel 2 (above) is Massau’u, the Hopi God, who is SunDancing and praying and crying for the lifeline of humanity. He is blessing all the worlds that have been, represented by the 4 outer corns, and the one that will be – the 5th world in the center, shown as a fully seeded corn glowing with light and merging with the Milky Way.

At the bottom is the lifeline of mankind – shown as a cross with 4 circles – one in each of the non-cardinals. The cross itself represents the 5th world.

In the panel below is the Corn God clothed in the basic colours of humanity. This is also representative of the Red Star Kachina showing the purging of conflicts and desires that are being burned away. 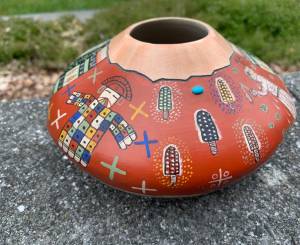 On December 21, 2012, 81 people from many different locations on Grandmother Earth gathered together in the Sacred Valley of the Souls in Bolivia for a Condor and Eagle Sundance to celebrate and pray for the birthing of the 5th World.

Untold thousands joined in by sending their prayers to the gathering through the energy of the Hopi Prophecy Bowl. The prayers they sent were for themselves, for their loved ones, for the earth, and for balance, peace, hope, harmony, and a new level of human acceptance.

You can still join this flow of energy and hope right now by pausing for a moment and sending your own prayers for the 5th World of Humans! 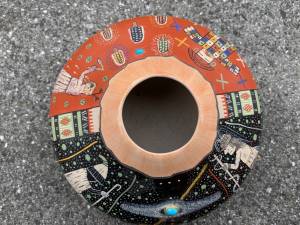